A Christmas Gift Finds a Home at Phi Delt 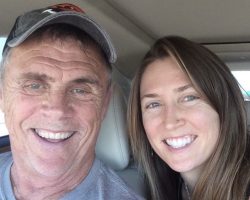 ​Brother David Beck (Fall 1966) joined Chapter Grand on September 2, 2017. He will be remembered by many. Thanks to his daughter, Katie Zarajczyk, a drawing of the chapter house she gave to her dad for Christmas 2004 will serve as a lasting tribute to him in the chapter house.

“I had heard many stories about his time in the house. Some of my Dad’s lifelong friends were his Phi Delt brothers. I grew up knowing them as my uncles and traveling as a family to Florida football games to spend time with them.” 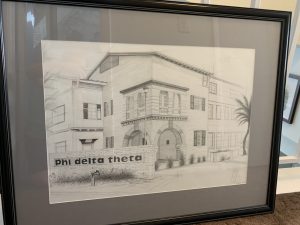 Brother Tom Treece (Spring 1998) who Katie considered “Uncle” Tom Treece, remembers Beck as “The Dancing Bear”. The nickname was the result of a Beck’s dancing at a particular Phi Delt party. “He just looked like a dancing bear and that’s what we called him.” The story was consistent with Zarajczyk’s memories of her dad, “He was super humble, goofy, guy.”

Brother Treece also confirmed folklore shared by Zarajczyk that Tom Petty would often play at the chapter house with his band “Mudcrutch”.

Only after contacting the chapter about her intention to gift the drawing to the chapter did she learn that ALS—the disease that ended her father’s life—is also Phi Delt’s national philanthropy. She and her mother, Carolyn Beck, were touched to know that Phi Delt is committed to supporting the search for a cure.

Brother Beck finished his undergraduate degree at UF, followed by a law degree. He worked as a prosecutor, a corporate attorney in California, and a certified mediator. In the 1970s, he joined the U.S. Army and earned the rank of first lieutenant. The final 11 years of his career, Beck served as a Volusia County Court judge and a circuit judge. 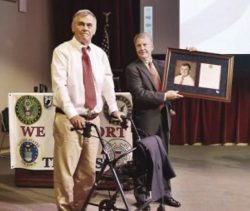 In his role as a judge, Beck made a tremendous contribution to his community and fellow veterans by creating a veteran’s court. Recognizing the potential for trauma experienced during military service and having seen firsthand how veterans struggled in civilian life, Beck helped to establish a new court in Volusia County to focus on veterans. The court would recognize where offenders with military service could receive additional resources to help them instead of entangling them in the criminal justice system.

Beck presided over the inaugural session of Veterans Court in November 2013.

Another testament to his giving nature, Beck coached a Special Olympics basketball team for 20 years. The team attended a May 26, 2017 ceremony held in Beck’s honor at a packed auditorium at Embry Riddle Aeronautical University. At that ceremony, the Veterans Court was officially renamed the Judge David B. Beck Veterans Court.

Brother Tom Warner (Fall 1966) attended the ceremony and said at the time, “David has a great respect for truth and justice. While Dave is smart in enforcing the law, he understood that locking people up, especially veterans, doesn’t solve the problems, doesn’t get at what the issues are. It doesn’t surprise me at all he came up with solutions to deal with the problems that our veterans face in today’s society.”