Ocala native Buddy Martin thought the brothers who recruited him to join Phi Delt were smart—and they were. They were smart enough to recognize a good potential brother when they saw one, even one in his junior year. After two months of invitations to the chapter house for chicken dinners, Buddy, who said he was “born to be a Sigma Chi” was certain he wanted to be a Phi Delt. He pledged in Fall 1959.

Martin earned a degree in journalism from Florida, but his journalism career started at the Ocala Star-Banner even before he pledged. He has written several books and received hundreds of industry awards including an Emmy for serving as an associate producer of The NFL Today show, a Pulitzer nomination, and the Wilton F. Martin Lifetime Achievement Award from the Florida Public Relations Association. Buddy, whose given name is Wilton F. Martin II, received the award created to honor his father. 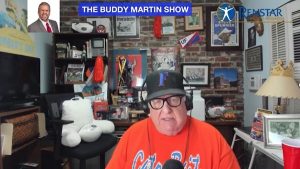 Buddy discusses all things Gators on his Facebook livestream

Despite graduating 60 years ago this year, Martin has no plans to stop doing what he loves to do. Martin owns and manages Gator Bait Media, which includes Gator Bait magazine and “The Buddy Martin Show”. Buddy can be found hosting live streams on Facebook four nights a week. “I don’t know what keeps me going. I’m bursting with ideas—but I have so little time,” Martin said.

During his years at Florida, Martin was poor. He was working full time and going to school full time. “I didn’t have time to do anything,” he said. Because he worked so much, Martin didn’t have a traditional fraternity experience; but that didn’t prevent him from building life-long friendships with a group known as the “Attic Brats”.

Five brothers including Martin, Cecil Edge (Fall 1956), James Manes (Spring 1959), Ed Seay (Fall 1956), and Bill Owens (Fall 1956) took an empty space—the house’s attic and installed sheet rock barriers to create “rooms” for them to live in. The brothers paid $5 per month, which was a $10 per month discount compared to a room with proper insulation. “The attic was the last place you wanted to live. We were right under the attic fan and on cold days we nearly froze to death,” Edge said. “You couldn’t beat the location of the house. Of course, we all rode bicycles then. We could eat breakfast and be in class within five minutes.”

Regarding Martin, Cecil Edge said “The man is the hardest working person I’ve ever encountered. His work ethic is outstanding, and he’s recognized as one of the most well-recognized sports writers in Florida. He’s developed real relationships with icons of sports—like Terry Bradshaw and Arnold Palmer.”

“We had a bond, and we loved the house,” Martin said. “We were poor. Living in the attic saved each of us $30 per semester. Interesting thing…every one of us went on to be successful and pretty well known.” 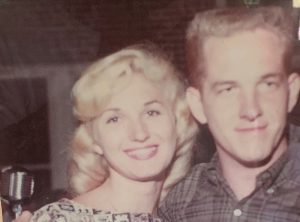 Buddy and Joan Martin in the PDT courtyard

While living in the Phi Delt attic saved him some money, Martin owes a different debt of gratitude to Phi Delt and Brother Vic Miranda (Fall 1956). Buddy and Lee Harrell (Spring 1957) were on their way to dinner when he saw Miranda walking with a woman named Joan Sharp. They all invited Joan to the house, and as Martin said, “That was it. Vic Miranda was responsible for introducing me to my wife. We’ll be married for 60 years this August.”

To learn more about Martin’s extraordinary ability to be in the right place at the right time when it comes to sports history, read his recent profile in Ocala Magazine. And catch up with him Monday to Friday on his Facebook livestream.