Byron Oldham (Fall 2006) never planned to take over the company business, but in 2014—just four years after graduation—Byron bought out his dad’s used car business. And only six years after that, Fruitland Park-based Honest Autos was recognized as a business in the Gator100 for 2020. He received the recognition a second time this year. The Gator100 recognizes 100 of the fastest growing businesses owned by a University of Florida graduate. 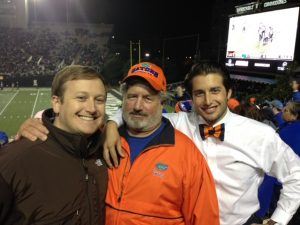 One might assume that Byron would automatically join Phi Delt due to this family history, but carving his own path was always an option. “Phi Delt was obviously a front-runner for me, but I just wanted to check out all my options. I rushed all the houses that interested me and still picked Phi Delt.” Byron said.

He was impressed with the guys he met. “Guys like Mike Gehring (Fall 2003) were leaders on campus. Mike was Blue Key and Chapter President. He made a great impression on me.”

He served the chapter as rush chairman his sophomore year and president in his junior year. “I was incredibly lucky during the year I served as president. We had a great group of guys. Even though we had a full social calendar we also had a high GPA. Most everyone participated in something on campus. We had nearly ten guys in Blue Key and more involved in Gator Growl.”

After graduation in 2010, Byron took a corporate job at a large ad agency and wasn’t interested in his family’s car business due to the stereotypical reputation of the used car dealer. But after a brief time, he recognized that he could create a business that was different than the stereotype.

“Too many people in the car business are short-sighted. I’m customer-centric and do everything I can to earn the trust of our customers. They become customers for life,” Byron said.

It’s a good thing that Byron is a self-proclaimed “car guy”, because his industry is facing what he calls “the most challenge environment ever in the used car business.”

“I’ve had to pivot from thinking of cars as a depreciating asset to paying 40% to 50% more than we’re used to. We’re in a bizarre space right now and we’re fighting to get inventory to keep on the lot. We have to be creative and buy more cars from private sellers and get more trade-ins,” he said. “Even though our customers have to pay more than one might expect, it’s no secret that the cost of goods has gone up, so this environment has not done anything for our margins,” he said. 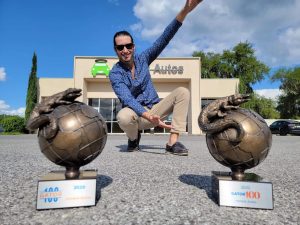 Anyone following the car market knows the pandemic has caused a chip shortage in the new car market. The new car shortage has had a negative impact on the used car market as well. “There are new car stores in my area that have 10% of the inventory they normally carry. Just to have something to sell they have become used car lots, too,” he said.

Just like the appreciating housing market, Byron said that the sticker shock might not be as bad if you have a car to trade that has also increased in value.

When he’s not working or following Gator Football, Byron takes advantage of life in Lake County. He loves to spend time boating and fishing. He is actively involved in coaching youth football and being a productive member of his community.

“When I came back to Lake County, I realized how important service to the community is. That’s something I learned from Phi Delt Theta and brought back here,” he said.

His service extends to Phi Delt, too. As a member of the campaign committee, Byron is a donor and pledge class agent and said, “Building a new house is something that has been on the chapter’s radar for two decades. We must protect the future of the chapter and keep up with the other chapters on campus who have already completed house campaigns and renovations. It’s now or never.”

Byron has a new reason to want to see this project come to fruition. He and his wife, Dana Perrone, had their son, Kane, in April. “I want to see Phi Delt at Florida continue to flourish so my son can pledge—if that’s the path he chooses to take.”