Brother Guy Norris (Fall 1982) is a lifelong Gator. The Lake City, Florida native followed in his dad’s footsteps two-fold, earning his undergraduate degree and his JD from the University of Florida.

Most brothers know Guy as the president of the Florida Alpha Educational Foundation—a role he has served in since 2006. He’s been a member of the Foundation since 1993. In addition to his Foundation duties, Guy is also a member of the Chapter Advisory Board. In 2015, Guy was invited to serve as the “interim” advisor. “One of these days,” Guy said, “I might get a promotion.”

Florida Alpha House Corporation president, Ryan Lipps (Spring 2004), has a unique bond with Guy. Both served as Chapter president, and they are exactly one thousand bond numbers apart. (1922 for Guy, and 2922 for Ryan). “I couldn’t feel closer to a Brother in the Bond. Guy has been an everlasting presence and invaluable mentor in my own brotherhood experience and countless other Florida Alpha’s brotherhood experiences,” Ryan said. 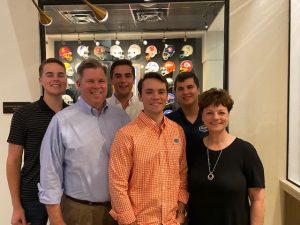 Guy’s presence has been especially important in the lives of his four sons, three of whom are Florida Alpha brothers: Will (Fall 2014), John (Fall 2018), and Paul (Fall 2021). Son James may complete the UF/Florida Alpha draw soon. Will and John also served as chapter presidents, just like their dad.

“While serving the House Corporation, it was an honor not only to work with Guy, but also to help mentor his sons, Will and John, when they each served our fraternity as Chapter president. Florida Alpha has also recently welcomed his son, Paul, as a new initiate in the past year,” Ryan said.

While Guy and Jason Townley were roommates and had “a pretty legendary party room in 1983,” Guy was quick to give a shout-out to Alex Abreu. It was Brother Abreu who introduced Guy to his wife of 30 years, Suzanne Beekman Norris.

Guy remembers Tom Fortune as a brother who had a profound influence on him. “Tom’s a great leader. He was the first member of Florida Alpha in our day that the UF Alumni Association recognized as the outstanding male leader. He started a very impressive run of Florida Alpha members who have received that honor over the last four decades.” After Tom, Guy received recognition as outstanding male leader as well as Brothers Alex Abreu, Bob Lloyd, Ed Scales, and Dean Cannon (Fall 1986). A new generation of recent brothers have also been honored as outstanding male leaders: Cory Yeffet (Fall 2010), Zach Kandel (Fall 2010), Ian Green (Fall 2015), and Will Norris.

In addition to everything else, one might say that Guy is the chapter’s de facto historian. Guy recognizes that the chapter’s ongoing outstanding reputation on campus was derived from its different strengths during different eras.

Guy explained that in the earliest years, Florida Alpha was one of the first fraternities at UF. It obtained the prime location of the chapter house across from what is now known as Tigert Hall. Tigert Hall was named after former UF President John Tigert—a member of Phi Delta Theta at Vanderbilt. Tigert was UF’s third president serving from 1921 to 1947. “We must give thanks for this great location to former UF President, Brother John Tigert.”

Florida Alpha boasted over 200 active members after World War II and in the 50s. “The chapter had so many members, Florida Alpha and Sigma Nu met annually in a full-pads football game held at Florida Field,” Guy said. 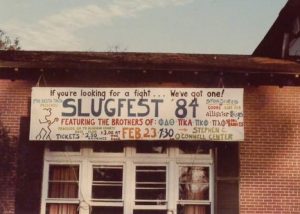 “In the 60s and 70s, many student athletes, particularly football players, were members of Florida Alpha. And in the 80s our reputation was derived from the success of the SlugFest boxing tournament that we sponsored. We excelled in campus leadership and intramural sports, including a runner-up national championship in flag football.”

During Guy’s tenure, ritual was practiced at every chapter meeting. “My chapter presidents Reed Baker (Fall 1980) and Tom Fortune were devoted to ritual. Our current house director, Larry Lamb (Spring 1983), was my warden and did a great job with ritual.”

Guy was a member of the Florida Law Review in law school, and has been active in The Florida Bar and local bar associations. He also participates in civic/service clubs and community, political, and religious organizations. In 2019 Guy served as chairman of the Florida Commission on Ethics and is a former state committeeman of the Republican Party of Florida. Despite all he has achieved, Guy still considers his leadership in Phi Delta Theta a highlight.

“It is one of the highest honors of my life for the Chapter to choose me to serve as their president. I lived in the house for several years and the president’s room is my favorite. There is a lot of history in that room,” Guy said.

Much was accomplished during Guy’s undergraduate years, but it wasn’t all scholarship, leadership, and service. Guy recalled that he caught the tail end of the drinking age of 18 and 19. “The Florida Alpha ballroom was regularly rocking with lots of beer, pretty girls, party music, dancing…and did I mention beer?”

Guy admits that if he had to do it all over again, he would go to class more often.

One tradition that Guy could not applaud was the chapter’s singing. “Our singing was notoriously bad. Singing of ‘Tell Me Why She Wears His Pin’ at weddings is always horrible,” he said. There were exceptions, however. The chapter performed well singing the Florida Alpha fight song “Phi Delta Theta for Aye!” (in the tune of Notre Dame’s fight song). “We also did well with singing ‘Old Man’s Verses,’ but those stories are not appropriate for publication.”

Regardless of rule changes and traditions, one central theme that Guy appreciates about Florida Alpha is that the members of Phi Delt at UF are regarded as great guys, “unlike the Pikes,” he said.

A Florida Alpha brother with experience working with chapter advisors is former Province president Doug Wiles (Fall 1972). “Guy is a very benevolent brother,” Wiles said. “Benevolence comes naturally to him. He has been at the center of many key decisions concerning the future of the chapter house and the day-to-day operations of the chapter. Having worked with many chapter advisors, I can say that his service to the chapter has not only been commendable but also unique. When he does something, he does it for the right reasons. His support of Florida Alpha has been immeasurable.”

Ryan Lipps likes to joke with Guy about being a “founding father of Phi Delt.” “With jokes and the generational gap aside, he certainly deserves a spot on the Mount Rushmore of Florida Alphas,” Lipps said. 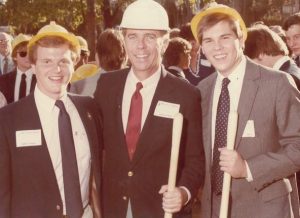 Most leaders have stood on the shoulders of giants. Guy is no exception. In his case, Guy valued the mentorship that Hyatt Brown (Fall 1955) offered him. “Hyatt Brown taught me what dedication to Florida Alpha really means. I had a front row seat to his contributions to the Chapter in establishing the Educational Foundation and fundraising long after his time. I also saw how important it was to him that his sons be Florida Alpha Phis. No one can match Hyatt, but I have tried, in a small way, to follow his lead,” Guy said.

Guy believes the future for Florida Alpha is bright. “So long as the Chapter members embrace the tradition of Phi Delta Theta, to live by the precepts of the Bond. If Florida Alpha members always act like gentlemen, and treat others with honesty and integrity, the Chapter will enjoy a foundation for success like no other.”

And given his Phi Delta Theta experience, this is a guy who knows what he’s talking about.