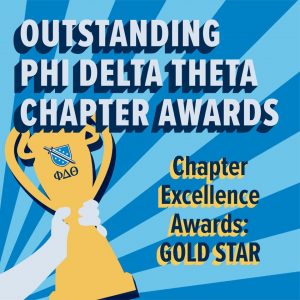 The recognition was gratifying for the undergraduate chapter especially given the restrictions on normal chapter programming during the pandemic.

“We are very proud of the work that went into returning Florida Alpha to a Gold Star chapter this year. It is the Chapter’s first Gold Star since 2017. I am grateful to the brothers who helped the chapter achieve this important recognition of our commitment to the Fraternity,” said Chapter President John Norris (Fall 2018).

Chapter Excellence Awards recognize top performing chapters based on a list of operational factors during the academic year. There is only one application; however, there are three separate tiers based on the quality and completeness of the application.

Several criteria regarding chapter operations are considered by the award selection committee. The application includes questions regarding the chapter’s philosophy of strategic, risk, and growth planning; maintaining bonds of brotherhood; alumni engagement, scholarship, philanthropy, community service, chapter operations, and ritual. There is also an important section of the application devoted to breaking negative stereotypes of the Greek Community, supporting the mental health of brothers, and living up to the values of Phi Delta Theta.

The application made the case that the Chapter earned the recognition due to its many achievements. In the previous year, the chapter made efforts to preserve the traditions of the ritual, establish goals through strategic planning, execute philanthropy events and community service, and foster lifelong brotherhood among the members.

“We have always done well securing recognition for our achievements. We have been recognized with the Silver Star Award for each of the last two years. We have also won awards for community service, new member retention, and GHQ reporting. We were confident that our chapter was worthy of the top recognition in the Fraternity and set a goal to win the Gold Star this year. It was great to receive affirmation of our efforts.,” Norris said.

In addition to the Gold Star, the chapter also won the Hayward S. Biggers Excellence in Ritual Award. Brother Asher Cohen was recognized as Outstanding Undergraduate Member, which is the highest recognition any individual member can achieve in the Fraternity.

These awards demonstrate the effort Florida Alpha members apply toward their Phi Delt experience and the outstanding leadership abilities they exhibit.

Chapter Advisory Board Member Larry Lamb (Spring 1983) said, “The chapter has made significant progress in several areas and we’re seeing the improvement thanks to the leadership of John and the Exec Board. We have a lot of good things going on. The Gold Star is an important foundation to eventually return the Harvard Trophy to Florida Alpha.”